I seem to have overcome my mental cooking constipation. I tried Melanie's yogurt recipe and am delighted to report, it worked! It was so exciting to take the cover off the thermos and see yogurt. It's a little tangier than the store bought Silk yogurt but that's ok by me. I packed some in Jim's lunch today with dried blueberries stirred in. I'm anxiously awaiting his report.

I'm on day two of my latest batch of sprouts. This go round I'm sprouting alfalfa, mung beans, broccoli and red clover. I've taken to using less seed than recommended and letting my sprouts get a little bigger instead. It makes them seem like a more substantial food source to me.

I meant to mention that I had tried using half the amount of sugar in the carob banana muffins that I made a few days ago. The results were good. Sure the muffins aren't as desserty but why do they need to be? If I were making them for company I would probably use more sugar but for us in everyday life, I think health should come first and that means using less sugar. 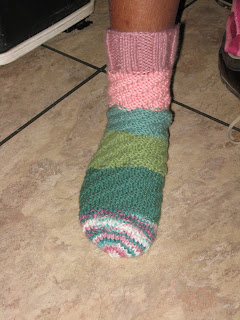 I'm am so excited! The sock could be tighter around the ankle but she didn't seem to notice and I have no plans to point it out. I'm going to check my gauge. I suspect smaller needles will solve my problem on future pairs. Fortunately, when I bought these needles off ebay I bought them as part of a set. I now have double pointed needles in all sizes 10 and under so no trip to the store is required.

Here's a little tutorial on how to give new life to a favorite scarf that's gotten raggy around the edges. Jim's had this scarf as long as I've known him and, though it pains me to admit this, I met him 20 years ago this past December. Jim loves this scarf but it looked like something had taken a bite out of the edges in several places. 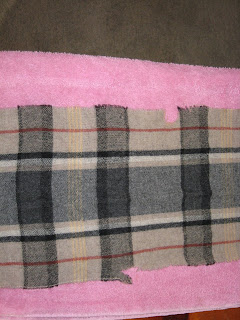 I thought about just folding the edges under and stitching but that would create a right and wrong side which didn't seem like a good idea. I mean we casually through on scarves and wear them as they fall, how goofy would big seams look if the wrong side was facing out?

Instead I opted to fold one side in. 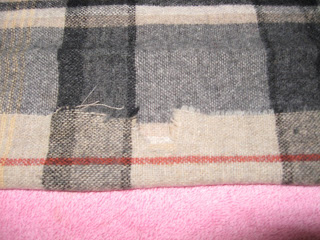 Next, I folded the other side in to create a finished edge. In the interest of keeping the scarf with two right sides, I brought this edge over the the other edge I'd folded. This meant folding the scarf essentially in half, which most people do when they wear it anyway. 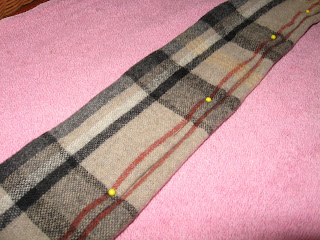 Once it was pinned, I ironed the edges to make them flat. The I made four seams to hold everything in place. One seam needs to run along the finished edge that you've created. Another two need to run along the pieces that were folded under. The fourth one is to hold the two sides of the scarf together without creating a bubble at the edge. 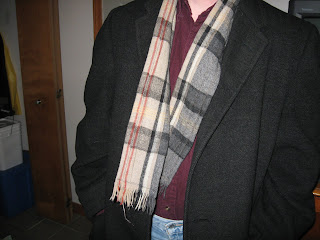 ooh! the sock looks great. I havent been working too much on mine... got distracted with dishcloths. I did make a copy of the pattern for my friend at work though.

What do you think of the ultimate easy sock: a simple tube with ribbed top and toe but no swirly ribs throughout?

I think if the yarn is stretchy enough it might work but I'm not sure. The swirl gives the sock a little elasticity. Hmmm...

Then again, regular socks don't have ribs of any kind throughoutthe whole sock, they just have them on the top, so why wouldn't it work? I feel a test sock coming on...