I guess I was busier without the girls here, because it never even occured to me to go near the computer this past week. I've been coming to terms with having just three weeks left of summer vacation. This morning was spent identifying things that no longer needed to be here. These items were packed into Jim's car and sent home with him.

What kind of stuff needs to go home? Mainly food that I know we're never going to get to in the next three weeks. In the past, I've left a food stash up here since we visit through the winter. All that is changing with the high price of oil. This year we're closing the house down for the winter. I'm bummed but I know its the right thing to do.

Speaking of the high price of oil, I'd like to introduce everyone to our new addition. 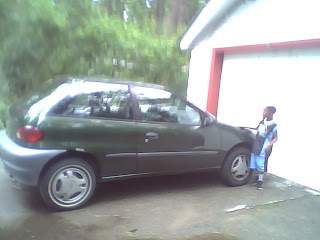 After months of trolling craigslist and ebay, we are the proud owners of a 3 cylinder, 5 speed, 1999 Chevy Metro. This baby gets about 50mpg and, even with the work it needed, came with a price tag of under $2500. It was a steal!! It's funny how your perspective changes as you mature. In the early years of our marriage we had one of these and we couldn't wait to upgrade. Fifteen years later we were kicking ourselves in the pants for selling it and yearning to buy another. BTW, if you're wondering why we didn't just buy a hybrid, this gets higher mileage with a much lower price tag.

If kicking ourselves in the pants got you thinking, "what about those boxers you keep talking about making?" fear not. I have an update to share. First let me say, I'm a moron for not realizing that, although I need two of each pattern piece, they need to be mirror images of each other. For the feeble minded, and I include myself in this category, this means either fold your fabric right side together and cut both pieces at the same time or remember to flip your pattern before cutting. I did not do this on the first pair and as a result, one piece will be right side in when I sew them together. I'm calling it a fashion statement but I'm fooling no one. Both boys recognized my mistake immediately. Kyle told me it was ok, which was good since the first pair was his.

I discovered that elastic is cheaper by almost half if bought off the roll rather than in little packages. Elastic ($.89/yard for 3/4 inch non rolling) and a king size cotton sheet (I believe it was $1.50 at the thrift store)are the only purchases I needed to make for the boxer short project. The sheet is to augment the collection of shirts that I'm using for fabric.

In terms of actual progress, I have both patterns made and pieces cut out for the first pair, although it isn't pinned yet because I got distracted with the bobby sock pattern from Easy Knitted Socks. I can't help it, knitting is an addiction! Here's the thing though, with the boxers I can see how the pattern will become the final product, not so with the socks. I can't figure how this heel turning business leads me to a finished sock. That's part of the addiction. I want to see how it turns out and I want to see it NOW!!!

Finally, in the interest of increasing the longevity of things we already have rather than buying new stuff, let me share the story of Jim's hat. It's just a baseball cap that says Lake George on it but it fits him the way he wants it to and the brim is bent just right...you know how it is. A while back he went to put it on and the buckle that you slide the piece through to make the hat tighter, fell off in his hand. There was no way to reattach the buckle since the center piece had broken off. I tried sizing the hat to Jim's head and sewing it permanently but the result was a hat that was too loose. It's hard to pin something tightly while its on the head of someone you love without stabbing them in the brain.

Jim was ready to chuck the hat but I begged for one more crack at it. He's a good sport but he had nofaith in my ability to fix this problem. Frankly, neither did I but pride and cheapness is a tough combination to reel in without exhausting every possibility first. I came up with the idea to slit the strap (using my favorite sewing tool, the seam ripper) that I'd sewn in place and insert a pieced of elastic to hopefully tighten the hat back up. Imagine my shock when it actually worked exactly as I'd planned! The hat is officially back in business.

I really love the feeling that comes with creating and repairing things. It seems everything I make or repair gives me the desire to make or repair something else.

Now I'm off to put on an Isaac Hayes record.
Posted by Katie at 6:04 PM

Congrats on the new car--you got a great deal!