Softer Hands While You Grease the Pans

It's easier to get help in the kitchen if the helpers know they will recieve some benefit as a result of helping. The boys like to lick the spoon of whatever was being mixed. The promise of this will get them to help with almost any kitchen task. (Its a little odd but they don't care what was mixed, everything from pancake batter to cookie dough is fair game as far as they are concerned. They don't seem to notice that some things just taste better cooked). The girls, on the other hand, are motivated purely by if you don't do this, then you can't do that logic/threats. That's what life with teenagers is like though.

But how do you get someone to do the really icky tasks, like greasing the pans and muffin tins? (I hate getting my hands all slimy). You just have to match the right person up with the right job. Jim works outside and all winter long struggles with dry, cracked skin on his hands despite slathering them with lotion. What better candidate to get his hands all greasy?

He was skeptical when I told him that I thought he'd enjoy greasing the pans but he's a good sport, so he gave it a try. After greasing a few muffin tins, his hands were fairly oily. Rather than washing the oil off, he rubbed the oil in. He felt it worked better than any lotion he had tried. Now he's willingly become the official pan greaser in our house and I'm thrilled because he never misses a spot.

Otis frequently positions himself so he can keep an eye on things in the kitchen. 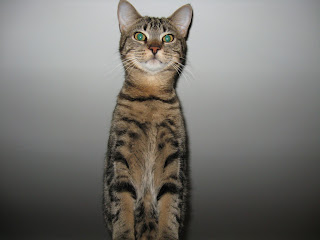 Speaking of the furry family members, Jim made an amazing find at a tiny thrift store that I usually avoid. Its not one of my favorites, in fact, I often refer to it as a shit shop. You all know the kind. It smells damp and funky, the lighting is bad, half of the stuff is broken and all of the stuff is overpriced. Some big changes went on since I'd been there last. It was cleaner, better organized and the prices were more reasonable.

I stumbled upon a 2 cup pyrex measuring cup to replace my plastic one. Jim found a very high quality, older, Oster dog clipper. The package had a receipt in it from Caldor dated 1973! Back then it cost $14.99, now a comparable one sells for almost a $100. We got it for $2.00! What a coup! 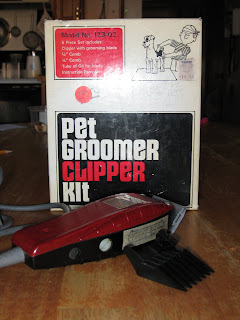 We've had our eye on one of these for quite a while because Mel gets so matted that he frequently renders the Flowbee useless. Click here for the back story on Mel and the Flowbee haircuts. Now the Flowbee will go in the to be donated pile which is ever growing.

The clipper is amazing but Mel's still looking a little sketchy. His haircuts can take a day or two because he gets so agitated. Plus, it doesn't help that I couldn't figure out how to put the guard on. I've used clippers for years on the boys but the guards always clipped on. This one slides on. I didn't know, I thought the clips had broken off. As a result, Mel's got some spots with really short hair and he's embarassed. He's asked me not to take any pictures until I even him out. You know how these macho dogs can be. I'll leave you with a before picture of him instead. 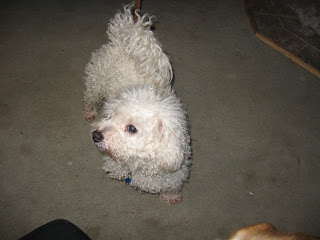 What cute fur babies! We too use to clip our babies and it took a couple days for them to begin to look right. I think Mel is perfect and I love Otis's face. :o)

I love Otis and Mel! I also am totally impressed by Jim's finds at the shit shop LOL! I *totally* get where the name came from, by the way.

Here is a hair cutting story for you. Often times we shave cats at the vet, as most of the time they need to be under sedation to allow this to happen. One of our patients reportedly spends two whole days in the closet after being shaved due to embarrassment before he goes out again to boss around the neighborhood.

Also, before we move back home we're planning on giving Lena a mohawk. LOL

PS I love the new pictures! They add such personality to your blog. :-)

Good move with the pan grease! Curious to know if you'd be interested in being part of a testgroup to try 4 new PROBAR flavors. E-mail me at probarfeedback [at] Gmail [dot] com. Thanks

MY DOOOOOOOG,
is amazingly cute.
and i love him.