We Interrupt Day Four of Holiday Crafting to Ask, What Did You Put In the Split Pea Soup?? 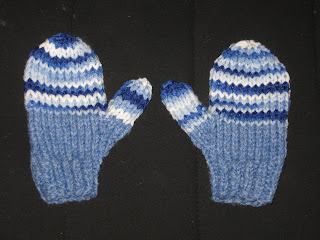 Does the fact that I think the thumbs on these mittens are just adorable mean there is something wrong with me? I kept showing them to everyone in the house while saying, "Look at the thumbs!" My sanity must be slipping.

If you've forgiven me for the thumb thing, beware what I did to last night's dinner is a doozy. I was making a batch of split pea soup, which I've done a thousand times before. I got the brilliant idea to toss in some frozen radishes because their peppery spiciness is lessened during cooking and pepperiness is good in split pea soup. (I think Ruthie made this observation recently as well.)

I went into the freezer and took out what I thought were frozen radishes and tossed them in but alas I was incorrect, they were frozen apples. Of course I didn't notice this until almost an hour of cooking. (Hey, I was busy pinning boxers, because I'm just too cowardly to go freehand. Ruthie and AnnMarie you are my heroes. I'm going to try one freehand but I'm scared!!) So there I was standing in the kitchen staring into a pot of split peas and apples, with the peels on so there was no hiding them!

I figured blending them would get rid of the visual evidence but what about the taste. I added a little extra vegetable broth as well as a bit of tamari and hoped for the best. Rob commented it was the best split pea soup he'd ever had and ate a second bowl. In fact everyone enjoyed it. I couldn't take it, I had to confess when the meal was over. Everyone was mildly horrified. I promised to be more careful. Tis the season for forgiveness so all was okay in the end.

My crafting agenda once again returns me to the sewing of the boxers and the finding of a knit beret pattern. Check out these sites for beret ideas.

A directory of hat patterns

Purl Beret - thanks Ruthie for letting me know about this pattern
Posted by Katie at 12:02 PM

Do you use nutritional yeast? I love it in split pea soup.

I think split peas are sweet anyways, so apples would be a great ingredient!

Mmm, then you can take the leftover soup and make it into a sweet curry with chunks of potatoes, carrots, and more apples. And maybe pineapple.

Good Housekeeping just published a curried lentil soup mix with dried apples that I'm giving a couple people for Christmas... so you're just keeping with the latest food trends! ;)

Too funny! I am glad it turned out. I do things like this all the time and they never seem to work out as well.

LOL I think Russell would be absolutely horrified about the apples/split pea soup thing. Of course that'd be after he ate three bowls. :)

I often add apples, intentionally, to hearty soups. The first time was serendipity. I was backpacking with a friend and we found a pot with a hole in it on the trail. We plugged the hole with a rock and combined our food to make a delicious stew. My apple went great with everything else in it!

You guys are too kind. You make my idiocy sound like it had gourmet intentions! I've never put nutritional yeast in split pea soup. I'll have to try that.