After a long run, prolific for a long time and mostly silent for even longer, I am stepping away from this blog and moving on to new adventures.  I've tried to make my new endeavors fit within the confines of this blog but it feels wrong to me.  The archives will remain since they continue to receive fair amount of traffic even after all this time.

If you want to follow my current adventures, join me on my new blog Saved by Kate

Thanks to all.  It has been a privilege to be a part of your lives.

In the days after Christmas leading up to the new year, I pondered what my resolutions were and I realized that I didn't want to make whimsical resolutions.  What I really wanted to do was set some concrete goals for myself.  The goal I kept coming back to was, to be open to the opportunities that present themselves.

So what does that really mean?  Well, I can't count how many times someone has said something like, "I would totally pay you to make one of those for me" or  something similar.  My answer has always been more of a bashful "ah c'mom" than a decisive, "let's talk about what that would entail."  My goal is to change my response and see if that actually gets people interested in a "put your money where your mouth is" kind of a way.

So we're in the third full week of January and here's how its working so far.  I've already been asked to make a hat and been paid for it.  The same person asked if I'd make a second one to donate for a charity auction and would I please include business cards so she could talk me up to the bidders.  (To say I love this person doesn't adequately express my feelings and no, she's not a relation.)  I'm also in the middle of a putting together a memory quilt for an acquaintance who is a great sewist but doesn't enjoy the random, non-traditional technique that this kind of quilt begs for, and yes, she's paying me to do it.

I'm feeling pretty good about my new approach.  What are your goals moving into the new year?
Posted by Katie at 9:17 AM 2 comments:

She Cleans Up Nicely

Am I the only one who starts to feel like they're living in Santa's little sweatshop as the week before Christmas nears?  I think I'm usually more organized, although I fear a trip into the archives lest it proves me to be a disheveled human overall.

Anyway, the last 24 hours leading up to Christmas Eve were almost a nonstop sewing extravaganza complete with a near constant stream of scraps being thrown over my right shoulder.  (I noticed I only throw over my right shoulder and part of me wonders if that means something but I had no time to investigate.)

Christmas is no longer at my house since my kids are older now, so part of my holiday prep now involves loading up the car and checking my list sixty four million times to make sure no ones' gift is left behind.  No one was forgotten and except for a pair of partly finished slippers and a pair of not even started yet boot toppers, all was completed.  Our visit to family was a whole lot of fun and everyone seemed happy with their presents.  Whew!

When I got home Friday evening and went back up to my craft room, it was worse than I remembered.  To quote my older son, "Its a crapfest in here."  I assure you,  he was being kind.  There was not a flat surface that wasn't covered in something and that included the floor.  When the dog sniffed the floor, thread stuck to his nose.  Nothing productive could go on until this creative explosion was brought under control.

Since then, I have spent a portion of each day organizing things in a way that makes sense.  Future etsy shop projects live in one place, large pieces of fabric  are in their own bin, small scraps in  a separate one, you get the idea.  Its starting to come together, although yesterday my son son said, "Its still a crapfest in here."  I think I need another day or two.

Part of this process, is letting go of the things that you aren't going to ever use.  That's hard but made easier by the fact that I can take these items to a local reuse shop for others to enjoy.

I leave you with a peek at the tops of two quilts I made for Christmas.  (For heaven's sake, don't look at the floor!!!)  The first was for my niece, the second for my nephew.  The tops were made out of fabric I already had, a fair amount of it was clothing that had cool patterns but were no longer functional (too small, worn out, unfashionable, etc). 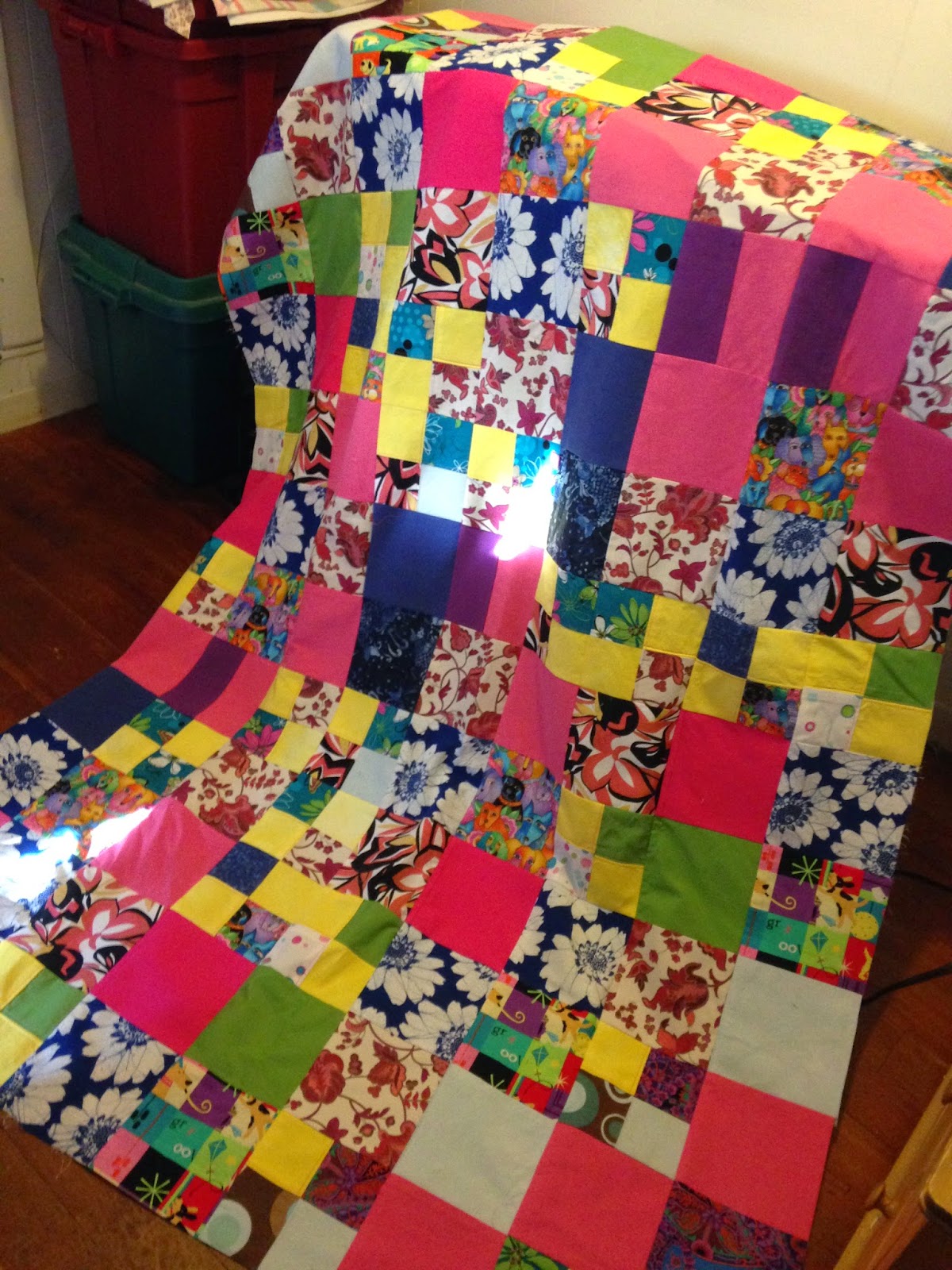 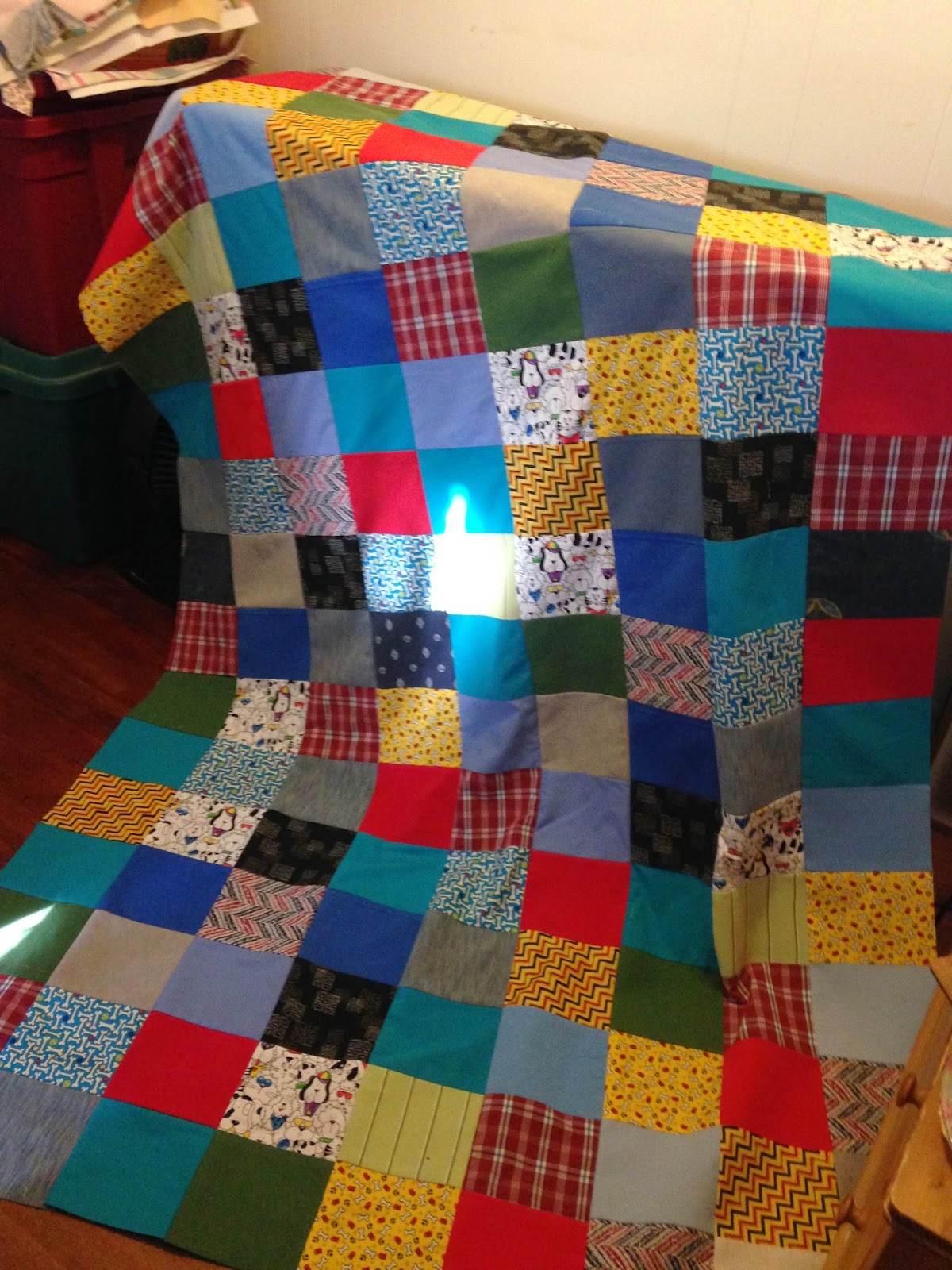 If you're inspired to use your scraps and some of them are t-shirts or other stretchy fabric, know that interfacing is your best friend.  How did I get along without this wondrous stuff?

Anybody else cleaning up their craft stash?

I finally got the shop updated.  I think it is more work to do that than to create the things in the shop.   I'd love to hear what you think.

I need to get back to my personal Christmas Projects but here are a few ideas to inspire you:

Try heading over to Sew Mama Sew for some fabulous sewing inspiration.  They truly have ideas for everyone on your list.

I still enjoy making the majority of our holiday gifts.  I also have discovered that I enjoy knitting socks.  However, socks knit on size 2 needles just don't come together quickly enough to be practical gifts.  Enter the sport weight winter sock followed by his big brother worsted weight sock.  I am in love!

Head on over to Ravelry and do a search.  The possibilities are endless.  I like to only chance patterns with 5 star reviews when I'm in a time crunch.  Let me know what you decide to try.

Well I truly thought I'd be able to get some pictures taken to list the the upcycled denim tote bags on SavedbyKate but since the sun hasn't been shining and my picture taking skills are limited, looks like that shop update will be waiting until the snowstorm is over.

I'll leave you with this very loose recipe for a tea to help clear up a stuffy head and cough.  It was told to me by a lovely woman at a winter farmer's market at Vassar College.  I tried to search for it in the blog since we've been making it for years but I came up empty.

In a saucepan pour about 4-6 cups of water and some fresh ginger, about a one inch piece.  I confess to totally winging the amount after all these years.  Bring this to a boil and then simmer for about 15-20 mins.


Top this mixture with the ginger water, straining out the bits of ginger, and enjoy.

The Rug Reveal and an Announcement

Well, I've been less than consistent with keeping up the blog, given the 9 month gap between this post and my last one.  Interestingly, that hasn't stopped people from visiting this space.  I'm glad its being viewed and I hope its being enjoyed.

The last post referenced a better rug making technique and asked if people could identify the raw materials and the means of assembly.  AnnMarie and DJ guessed t-shirts and that is absolutely correct.

The technique remained a mystery.  Now for the big reveal, they're knitted flat on giant circular knitting needles.  I believe I used size 35.  The end product is thick, squishy and entirely machine washable and dryable.

So far these rugs have made it into the hands of my both of my daughters and a professor from Syracuse who won one that I donated for a silent auction.  Of course a few are in use at my house but that, I'm sure, surprises no one.

In other news, I just participated in my second craft fair this past weekend.  It will be no surprise to anyone reading that my items are made from upcycled fabrics.

Here's a peek at a few of my items: 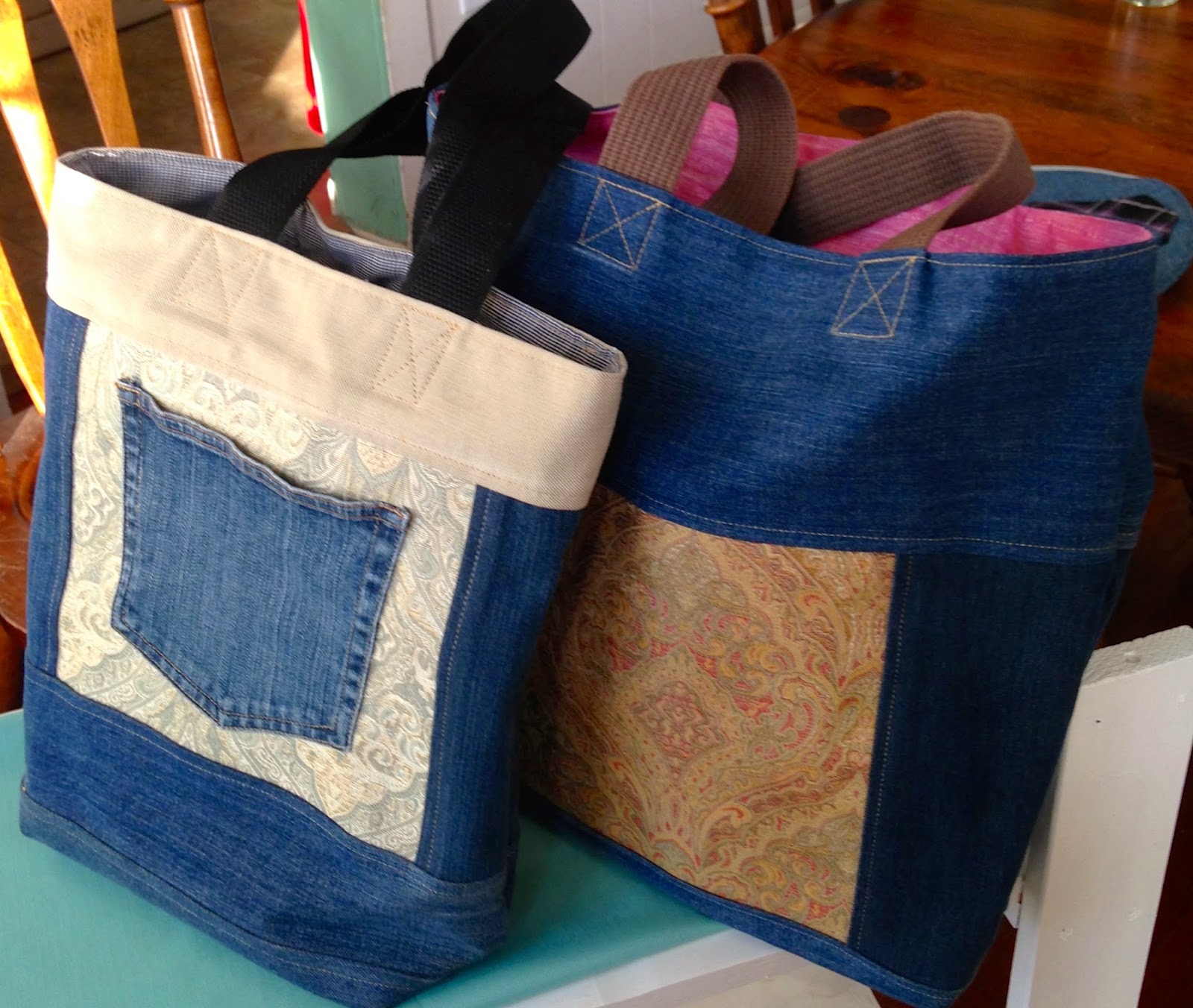 Back in March, I mentioned that I set up an Etsy shop but hadn't had the courage to put anything into it and actually launch the shop.  Fear is powerful.  I participated in The Sewing Party in early November and one of the online classes was Becoming an Etsy Entrepreneur.  That class gave me the kick in the pants I needed to get the shop up and running.

So let me introduce you to my Etsy shop, SavedbyKate  The inventory levels of current items listed will be updated by Wednesday as I incorporate leftover craft fair stock into the shop.  New items will be added by Wednesday as well, like those tote bags you see above.

This is a new experience and definitely one I'm learning from, so I welcome your feedback.  Of course, I'd love it if you share my shop with your friends.

I'm looking forward to sharing this new adventure with you!