I'd Rather Be Cooking or Knitting Anyway!

If you step outide my front door, see that its snowing and shake your head from side to side, here's what you'll see. 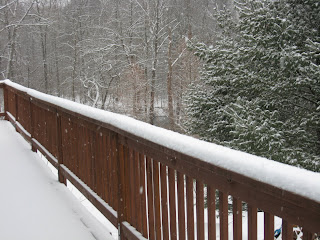 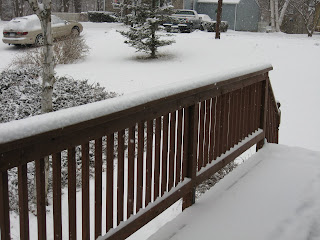 The pictures don't show it but the snow is still coming down. No school for my kids today and my job will likely close as well. Looks like we'll be hanging out in the house today. I think we'll make some popcorn balls with the vegan marshmallows I got from Pangea. Did you know they sell the funny looking ones at half price? I figure the fiber of the popcorn will negate some of sugar shot of the marshmallows. If that fails, I'll send them all out to shovel the driveway!

Speaking of expensive treats, soy yogurt is so expensive that I rarely by it. Plus, it has always irritated me that yogurt cups aren't recyclable. That having been said, there are times when yogurt is the only thing standing between you and your upset tummy, like when you're on antibiotics. Jim's the patient. He's taking antibiotics as he awaits a root canal appointment Monday. Doesn't that sound like fun?

In the interest of his decreased stomach pain, I've had to suck it up and buy soy yogurt. I've been buying the 32 ounce containers of Silk Vanilla yogurt to minimize my cost and plastic waste but everyone keeps eating the yogurt like its some rare delicacy, which, around here, I guess it is. As a result we're going through a lot of yogurt.

Because of this, Jim and I were toying with buying a yogurt maker until I came across this post from Melanie over at Bean Sprouts. Thermos bottles I have, so it seems all I really need is a food thermometer, which I really should have gotten years ago anyway.

Now for a puzzle. What's this she's so bravely knitting with double pointed needles? 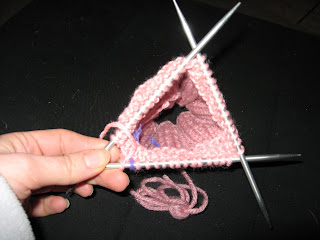 Why its the first sock from the very simple sock pattern I mentioned here. This pair is going to have wide stripes per Natasha's request. 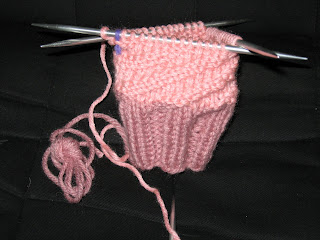 Later on we'll snuggle up with a movie and I'll sneak in a little more knitting. I'm starting to be known as the lady who knits by the other swim team parents. It's an obsession! BTW, for anyone keeping track, I bought all the double pointed needles a girl could want or need in a lot on ebay last week.
Posted by Katie at 6:55 AM

Oh it sounds like you're having such a fun day! I envy you, though not the snow, we're up to 42 degrees! But we had a yucky February while yours looked rather tame. :-)

Thanks for the headsup on oops marshmellows. Ever thought about making your own? I was thinking about trying the popcorn ball recipe on veganlunchbox blog but never got around to it. That Jennifer is so creative.

Please keep us updated on the socks!

Thanks for leading me to sproutpeople.com. I'm learning so much! I think I may make some sprouted grain bread soon.

I've seen recipes for making my own marshmallows but I never tried. I'm glad you like sproutpeople.com. They seem to have all the answers. I want to try sprouted grain bread too.