Since the living room was emptied for the rug to be installed, I've had a bit of trouble putting stuff back in. It looked so nice empty. Its been a good opportunity to do a little unexpected craft culling. I've begun the tedious task of sorting through two boxes of buttons that I acquired a while back. Some are broken, some are hideous and there's an awful lot of linty ickiness in the boxes. My goal is to get it down to one box of useable, useful buttons. It could take a while though, I keep getting disgusted and walking away from the project. 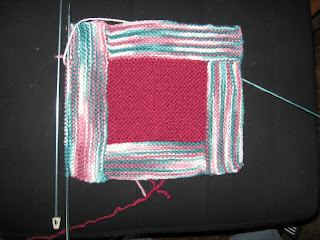 My log cabin blanket is coming along. I know you're not supposed to do the same yarn on all four sides but its my project and I wanted to finish up this little ball of yarn so a big raspberry to anyone who doesn't like it! I've got quite a collection of little yarn balls that will become part of this project.

I just took Cheaper & Better Homemade Alternatives to Storebought Goods out of the library. I haven't had a chance to really look at it yet but I've heard good things about it.

I'm off to get the day started! Bread to make, laundry to wash & hang, dinner to get started. There's no room for unfrugality (is that even a word??) right now since we've begun the project of replacing our worn out deck. The cost of the supplies is enough to give me heartburn. Between that and the cost of gas, we've got to keep our expenses super low as we try to sock some money away for the two months that I don't work. Time to kick into Frugal Overdrive!
Posted by Katie at 9:17 AM