The Beach Bag is Complete 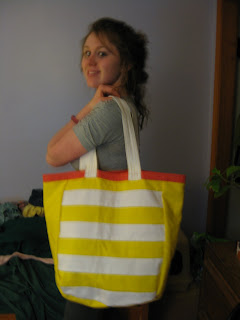 For anyone looking for the exciting conclusion of the beach bag tutorial, look no further. The straps were made out of the same fabric as the bag itself. I suspect there are simple ways of making the straps than mine but here's how I did it.

I started with 4 pieces of fabric that were 25 1/2" x 2 1/2". These measurements included seam allowance. I pinned and sewed these into two tubes, leaving either end open to accommodate overlapping the edge of the bag on both the inside and the outside. 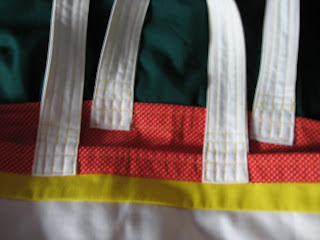 In retrospect this was needlessly fussy since my daughter is not likely to use the bag inside out. However, doing it this way does make the bag reversible if you wanted it to be.

Here's a closeup of the stitching. 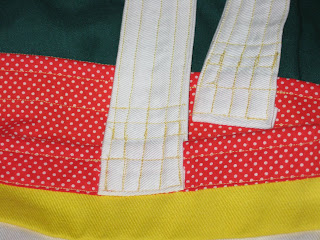 I did all the stitching on the strap, except the part that is actually attached to the strap, prior to attaching it to the bag. When it came time to attach the strap I just continued the stitch pattern to create a strong anchor point. I'm no fan of basting but I did baste initially to attach the straps to the bag. The pins needed to hold the strap in place made it almost impossible to use the sewing machine, hence the need for basting. I did my basting in bright red to make it easy to see what stitches needed to come out when I was done.

Sew what's next? Two more beach bags, one for Tasha and one for Leen's best friend.
Posted by Katie at 8:42 AM

That is gorgeous! I am jealous :o)