Somewhere, perhaps in one of the many blogs I peruse or one of the lists I belong to or perhaps it was just in conversation, it was said that so much stuff is bought by people whimsically that the rest of us should never have to pay full price buying anything new again. I agree, I agree, I agree!

Sure there are some things that are so specialized, or personal like underwear, that buying new is necessary. Although, check out this link Chile showed me a few months back before committing to the underwear portion of the statement. I haven't tried making undies yet but this summer, when I have time on my hands and nothing to do except embarass my teenage daughters, I will do it!!

But I digress, in our area we have craigslist as well as several on line tag sale sites and of course freecycle, Reuse it network and freesharing too. Ebay is an option too. You can keep it local by narrowing your search by zip code. Of course your local thrift store has even more to offer.

We wanted a car top carrier to make the car a little roomier for trips upstate. We found one for less than half of what we'd have paid new thanks to a little sleuthing on our local craigslist.

We also wanted a covered litter box for the hurricane that is Otis. 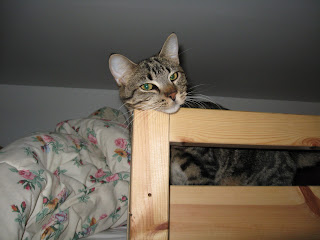 He looks so cuddly innocent but he routinely causes little to fly around the room and scrapes the walls in an effort to cover his extra smelly poo. I was able to find a covered kitty box on our local ecycle (like freecycle but our group is no longer part of the freecycle network) list for free.

Now, I'm on the lookout for some double pointed knitting needles for a really easy sock pattern I just found in the book Kids Knitting by Melanie Falick. This pattern is called "Magic Spiral Tube Socks" and makes a chunkier sock with less shaping than traditional socks BUT it uses worsted weight yarn (read: easy to find in thrift stores or to unravel a sweater and recycle) and gives instructions for using up your scrap yarn to make stripes! I don't think you need to buy the book. I'd suggest taking it out from the library instead.

Our ecycle group lets us put out wanted posts which can make the process of finding things so much easier. What about you? Have you tried getting what you want from places other than the store?

Let's not forget, all the above resources are great places to rehome your unwanted stuff. Kids grow and tastes change. There are plenty of useful things that take up space in my home because they no longer fit or no longer hold a place in my heart. (Am I the only one who no longer cherishes the Precious Moments figurines that I just had to have in the early days of my marriage?) Purge your space while making someone elses day.

In food, we had an amazing success making Spicy Vegetarian Sausages. This was a huge hit among our family and our non-veg dinner guest this weekend. I didn't want to use the aluminum foil, so I tried using cheesecloth instead. Don't do it! We were picking strings out of the sausage for quite a while. Also, my steamer wasn't big enough and it ran out of water making a gunky mess. I wound up baking them, covered in the oven at 350 degrees for about 45 minutes. In spite of my cooking disabilities that day, it was delicious!

In a less successful food venture, I've come to the conclusion that cardamom tastes and smells like the Lemon Pledge of my childhood. It tainted some apple muffins I made this weekend, not enough to make them inedible just enough to bother me.
Posted by Katie at 8:47 AM

I'm one of those strange people who love the smell of cardamom. Both the green and "black" kinds.
Both are essential in Indian cooking.

You're not strange James, I know lots of people who love cardamom. I think it's a lot like cilantro, you either love it or hate it.

i love freecycle....we have local classifieds web sites and they are soooo popular....

if you have pics of those precious moments email me...

im a collector but only second hand ones...

I can't imagine it smelling/tasting like lemon pledge. Are you sure it was fresh? I ADORE the cardamom bread my Mom makes and I've chewed cracked cardamom seeds as a breath freshner. I just pulled out the package and it does say it has a citrusy scent but it seems more spicy than pledgey (to me).