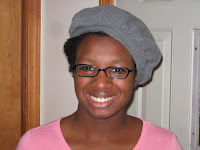 Halloween always finds me pinning or stitching right up until the last possible second on someone's costume and this year was no exception. Although the boys had their costumes under control, the girls did not.

Leenie, who dressed up as a rockstar, had a last minute urgent need for a sweatshirt to cut up a la Jennifer Beals in Flashdance. Fortunately, there's always a ratty sweatshirt or two hanging around our house. In fact, Jim and I both volunteered sweatshirts to the cause.

Tasha decided to be a beatnik. She planned to dress all in black, wear a beret and carry a Jack Kerouac book. But wait...we don't have a beret! "We'll make one for you," I announced with so much false confidence at 3pm on Friday afternoon that I even convinced myself. I did a quick google search on "easy beret" and came up with this pattern and tutorial. Now all we needed was some black fabric...

I came up with a very dark gray shirt that I'd somehow gotten a huge stain on the front of. Since Tasha planned to wear dark gray flats, this was perfect. I set about following the tutorial. Naturally I couldn't find bowls to match the sizes listed, so we improvised with slightly smaller bowls.

We worked assembly line style, I cut the pattern while Tasha set up the sewing machine (which brings up the fact that I really need to get rid of the bobbins that don't fit my machine. They just slow me down as I check to see if they fit for the millionth time!) It was definitely an easy pattern. In about an hour, including the time it took to do the google search and finding the fabric, the beret was done.

The beret came out remarkably well considering the haste with which it was assembled. It really completed her costume. Tasha liked it so much she wore it to a family party on Saturday and she's asked me to make her one in red. Go figure!
Posted by Katie at 8:48 AM

Lovely beret. I may just need to make one for my francophone self :)

Tasha is so beautiful! You have a gorgeous family Katie. :o)