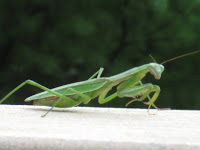 Check out my new friend. The boys watched him for hours the other day. They even got to see him pounce on and then leisurely eat a giant fly.

The temperature started to drop yesterday and the wind picked up a bit. It's really starting to feel like fall. I celebrated this by making split pea soup last night. Although split pea soup is one of those simple recipes that is always a hit around our house, I'm always looking to get it closer to my pre-veg version. You know, the one with the ham in it.

I know liquid smoke is supposed to do the trick but I've never bought the stuff. I've tried adding bits of seitan with pretty good results. (I find baked seitan works best.) Last night I didn't have any leftover seitan so I decided to try a little tvp.

While my cast iron frying pan was heating up, I tossed in:
3 cups dry tvp
3 cups of water
2 tsp garlic powder
1 tsp basil
about a tablespoon of tamari
several squirts of ketchup

I stirred this together and let it cook until it was dry and a bit crispy. You'll notice that the inspiration for this is once again drawn from Russell's Sausage recipe (which I'd link to but I can't find. Ruthie where is it???)

I served it sprinkled on top of the split pea soup, although a few food purists in the house demanded that I serve it on the side. (I can't stand the "I don't like my foods touching" phase of childhood.) Everyone liked the way it came out. I've got to store that one away for future reference.

The CSA pickup last week had mixed greens in it. The flavors were too strong for salad and initially I was at a loss. I think making greens palatable is such a challenge sometimes. Oddly enough, I don't include kale, collard and swiss chard in this. My family is already very willing to accept them. Perhaps in time, the mixed greens will join that list but in the interim, I still had a problem.

I opted to make sweet and sour sauce. I use the one in The Compassionate Cook for inspiration. I mixed it in the bottom of large Pyrex bowl and then put the chopped greens on top. I covered the bowl with a plate and microwaved it long enough to wilt the greens. Next, I tossed the wilted greens to distribute the sauce on the bottom. The result was some very palatable steamed greens. BTW, I didn't use any thickener (ie. cornstarch, arrowroot or flour). I didn't think it would work out well the way I was using the sauce.

Happy almost weekend to everyone!
Posted by Katie at 9:21 AM

I think I need to repost his recipe.

I love the praying mantis. :-)

Can you believe I've never had split pea soup as a nonveg?

I think you do! I never had split pea soup until I was an adult.