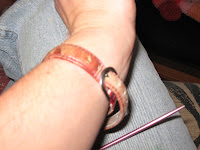 This is my sad little watch band. The little loops that hold the band in place fell off months ago. It didn't stop me from wearing it but I suppose it's not a very elegant look. Then, to my horror, it started falling off because of the lack of loop support. What could I do??

I kept waiting to stumble upon a watchband at a thrift store but it was not to be. Yesterday inspiration struck compliments of Threadbangers Blog. If you scroll down on the right side they have a list of "learn how to make..." I clicked on macrame bracelet or necklace. Suddenly I knew I could solve my watch band dilemma using what I already had on hand (a wise idea considering the economic turbulence going on).

I dug into my sewing box and came up with black and white elastic cording. I wanted something I could take off when I showered so elastic seemed like the best choice. I began following the instructions when I discovered the band was too thin. Another go round through the sewing box revealed a thicker elastic. I opted to use this in the center and the thinner ones on the sides. The center one essentially just acts as an achor for the other two to wrap around. 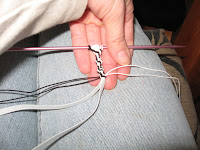 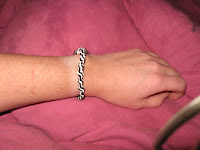 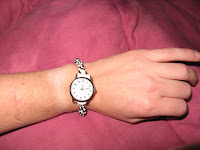 Now I don't pretend that this is a tutorial. If what I'm suggesting doesn't make sense go to the original Threadbangers tutorial, it's very clear.

What other creative frugal ways have you solved problems like this one?
Posted by Katie at 12:08 PM

Very clever, does it dig into the skin?

It doesn't dig into my wrist at all. I accidentally made it loose enough that it can freely slide from just above the tan line left over from my former watch band down to my wrist. I thought I'd have to take it off to sleep but I don't notice it at all.

Hi, you don't know me but I've been reading (and liking) your blog for some time. This post reminds me of last week when I was wearing a "new" (from Goodwill) pair of pants to work and realized that they didn't fit quite as well as I thought they did. I needed a belt but didn't just happen to have one. I teach at a progressive school and we do a lot of knitting in my classroom. I pulled out a ball of yarn and began furiously finger-knitting a length of "belt," prompting my teaching partner to ask, "WHAT are you doing?" And I lamely had to reply, "Um, making a belt so my pants don't fall down..." It worked!

Claire wingraclaire.livejournal.com
(I don't really use the blogger site.)

That's awesome! I always hope in those moments that the person I'm speaking to will appreciate my creativity and problem solving abilities but more often than not I just feel like a weenie. Then I have to call or email or post about it so I can reclaim my dignity.